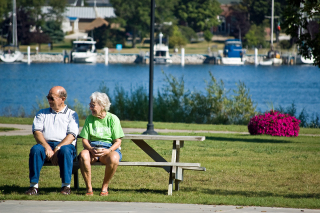 “You’ve retired. You received your gold watch, claimed Social Security and begun to plan that oft-delayed trip of a lifetime…. Where, though, should you enjoy your repose: Hilton Head, South Carolina? Jekyll Island, Georgia? Maui?”

This answer will definitely surprise you: Sioux Falls, South Dakota. According to a new study conducted and reported on by Bankrate.com, “These are the best and worst states for retirement,” that is the number one best state to retire, with Utah, Idaho, New Hampshire and Florida coming up next on the list.

New York makes life hardest on retirees, with a combination of high taxes and high property costs.  Here’s another surprise: Arizona and New Mexico, both very popular states for retirees, ranked in the bottom half of the study.

When it comes to retirement, thinking inside the box bumps into some tough realities, such as the cost of living, crime rates, cultural offerings, health care quality, taxes and weather.

So, what’s going on in South Dakota that sends it to the top of the list?

Well, it’s not the weather. The average annual temperature is 45 degrees. The cost of living score and crime rate, while in the top half of the list, both finished well outside the top ten.  However, people who live in South Dakota are very content with their lives. A poll by Gallup, part of its “State of Well-Being” series, reviews more than 2.5 million surveys that ask how people feel about five aspects of their lives: purpose, social, financial, community and physical well-being.

Residents of South Dakota scored highest on the well-being and have been in the top six for the past five years.

This may be one reason why: there’s no income tax in South Dakota. The state scores well on healthcare value and measures well on cultural vitality. There’s no lack of natural beauty as Mount Rushmore, Custer State Park and the Badlands National Park all call South Dakota home.

Utah did almost as well as South Dakota. Cost of living, overall crime, well-being and taxes are all rated well.

Idaho is both more affordable and safer than the top two states. The tax burden is higher, however, and when it comes to culture, rankings are not great.

New Hampshire is the safest place to live, provides great healthcare to residents, features low taxes and lots of great outdoor and indoor activities.  However, it is cold there and the cost of living is high.

Florida residents don’t worry about cold weather, although severe storms can be part of the sunshine state. Taxes are low, but every other metric, including the quality of healthcare, are middle of the pack. At an average of $280,000 a year per person, healthcare costs are a factor to consider.

Reference: Bankrate.com (July 12, 2018) These are the best and worst states for retirement