Own Guns? Don’t Leave Your Heirs This Problem 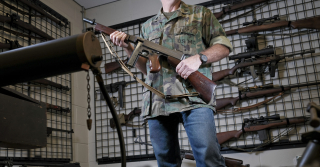 “Most gun owners are cognizant of the strict regulations concerning ownership of a firearm. However, their family members and heirs are often unaware of the laws governing the disposition of a firearm, when the gun owner dies.”

The NY Secure Ammunition and Firearms Enforcement (SAFE) Act, enacted in response to the Sandy Hook shootings, amended many of New York’s laws to provide strict regulations, including guidelines and a timeframe for safeguarding firearms after a gun owner dies.  However, do the new laws leave family members and heirs at risk of criminal liability?

The New York Law Journal considered this issue recently in an article titled “Death of a Gun Owner: Criminal Liability for an Heir?” The article looks examines how the act works and what happens to heirs, when a gun owner dies.

The SAFE Act created a statewide database that tracks people who were issued gun licenses, closed some loopholes regarding private gun sales, required stricter gun storage retirements and created more strict penalties for people who are found guilty of using or owning a gun.

In the estates world, the act also amended the New York Surrogate’s Court Procedure Act (SCPA) that requires estate fiduciaries to file a firearms inventory with the Surrogate’s Court to settle the estate of a decedent who owned guns. The inventory must be filed with the Division of Criminal Justice Services as a way of ensuring that the state knows where guns are located and about any transfer of ownership. There are also very specific time limitations for when the inventory must be filed.

What if your heirs don’t even know you own guns?

When a licensed gun owner dies, the person in charge of the decedent’s personal property is technically in illegal possession of the gun and guilty of criminal possession of a weapon. The law does provide an exemption from criminal liability for an executor or administrator or any other lawful possessor of a decedent’s firearm if, within 15 days of the death of the gun owner, the person either disposes of the gun lawfully or turns the gun over to the police.

Failure to do so could result in criminal charges, including a class A misdemeanor punishable by up to one year in jail or three years of probation and a $1,000 fine.

Fifteen days is a very short time in which to require that the gun is turned over to the police or “disposed of lawfully.” People who are not gun owners may not know what they should do. In some states, the law requires that the disposal of firearms must be conducted by a licensed firearms dealer.  However, there is an exception for transfers between immediate family members. That means spouses, domestic partners, children and stepchildren.  However, those receiving the gun must have a valid license to possess a firearm.

Each state has different laws regarding the possession of firearms, in addition to federal requirements. An experienced estate planning attorney will know the laws of your state and help you properly prepare for the transfer of any firearms. This is one headache you don’t want to leave your heirs to face.