“Police Detective Rosalee Reid told of one scammer who tried to entice her to give up her personal information, so he could attempt to drain her bank account by promising her she’d “won” $750,000 and a white Mercedes Benz.”

Too bad this particular scammer had no idea to whom he was speaking. The officer played along, asking when she could get the car, and telling the scammer it was snowing and she didn’t want to get that on her brand-new Mercedes. After too many questions, the scammer hung up on her, reports the New Haven Independent in an article “Senior Study Scam Avoidance 101.”

Unfortunately, not every senior is that savvy, when it comes to being scammed. According to the Federal Trade Commission, Americans lost more than $900 million in 2017 – that’s $63 million dollars more than in 2016 — to fraud, and many of the victims are seniors, who are routinely targeted.

Some of the cases are debt collection fraud, where a phone caller says they are calling from the IRS or the U.S. Marshall Service, stating vehemently that the person they are calling owes money to the government. The threat of jail time is frightening to enough people, that they fall for it.

Seniors are advised over and over again: the IRS does not call to make threats, and it’s definitely not calling to demand payment in gift cards from a major retailer. However, the scammers speak with authority and are extremely convincing. As a result, many people fall into the traps.

What makes scammers more frightening, is when they use a small piece of the senior’s identity. They may read the home address and insist that they will come to their home to collect the debt. They could also mention a family member, one who has passed away lately, and claim that they know everything about the person.

Another scam is to call and say that a beloved grandchild is in prison or has been kidnapped and needs money fast to pay ransom or bail to get out of jail. If this occurs, immediately hang up and contact the person or someone who can verify their safety, to make sure they are okay.

If someone has been arrested, they have the right to make one phone call. Authorities are not likely to be calling a person’s grandparents for bail money.

Another major source of fraud comes from those who know the senior or befriends them, solely to get their money or even their home. There are tales of caregivers, who become more and more involved in a senior’s life, often pushing their family members away and isolating the individual, so they can’t ask for help. Be wary of new people who are pushy about being helpful, especially if they ask to use your credit card or debit card to run errands for you.

Sadly, there are also many instances of family members who are charged and convicted for financial elder abuse, using their relationship with aging parents or other relatives to gain access to their finances. Be wary, warn experts, even when it is a family member. Read your credit card bills and bank statements carefully, to make sure that your money isn’t disappearing. Keep personal finance information secure.

You Can Avoid Elder Financial Abuse, but How? 你可以避免老人經濟虐待，但如何？(中英對照) 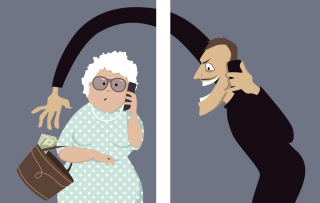 “While a longer life is a good thing, it will also present challenges – and unfortunately, sometimes financial predators.”

The prospect of a long, healthy and active life is a wonderful thing to consider. However, one in 10 seniors have suffered financial abuse, according to The Kansas City Star’s article “Five ways to avoid elder financial abuse.” The grandson of Brooke Astor spoke at a conference about how his grandmother’s last years were spent living in squalor, as a result of her son and guardian stealing from the estate and cutting the amount of money available for her care. The grandson and his brother sued their father to protect their beloved grandmother, a leading philanthropist and one of New York’s high-profile society figures.

However, elder financial abuse is not limited to the super wealthy or socially prominent. One report noted that one in ten seniors suffers some form of financial abuse.

Why does this happen?

As we age, our brain also ages making us more susceptible to making poor decisions. Even high-functioning retirees with no outward sign of dementia, find it harder to distinguish safe investments from risky ones. The probability of dementia also rises as we age: only 7% of people over 60 have dementia, but nearly 30% of people over age 85 have some degree of dementia.

Here are some suggestions to minimize the likelihood of financial elder abuse:

Communicate. Talk with your loved ones on a regular basis, so you know how their health is and what they are doing. If they don’t want to talk about money, you can start the conversation by sharing something about your own situation. Remind them about safe practices like shredding receipts, bills and account statements. Remind them not to open emails from people they don’t know and not to give their Social Security number or account numbers on the phone or online to people they don’t know.

Stay involved. Know how your loved ones are spending their time and money, by staying involved in their lives. If they are hiring people to do work on or in the house, know who those people are and check their backgrounds. Get to know their home healthcare aides. Review their bank statements to ensure no unusual activity is taking place. If you see that they are starting to decline, offer to take over tasks for them.

Check and balance. Make sure that the correct estate planning documents are in place to allow trusted family members to help, if the need arises, such as power of attorney and medical directive. Divide up responsibilities; consider having one person in charge of bank accounts and another in charge of investment accounts. Trade responsibilities every few months.

Streamline accounts. Fraud is harder to see, when there’s money in multiple financial institutions with multiple advisors and life insurance policies from several different brokers. Spend the time to do a complete inventory of all accounts. If you can, consolidate accounts. 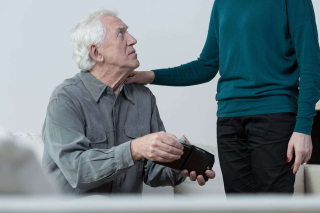 “It’s a tough situation for people in financial services.  However, these circumstances can pull the curtain back on elder financial abuse. That’s because banks and other financial institutions can sometimes spot potential problems early.”

A man who makes loans in a company, that is not quite a bank and not quite a payday lending company, remembers when a young man came in for a loan to buy a truck. According to wbhm.com’s report “Uncovering Elder Financial Abuse? It’s Tricky,” the 19-year-old did not have any credit history and had only been employed for a few weeks, so he brought his grandfather with him to co-sign the loan application.

The grandfather told him, “I don’t really want to, but they’re saying it’s the only way he can get it.” This raised a red flag for the man as a possible instance of elder financial abuse, but it presented a difficult situation. He wanted to make the loan and avoid negative reviews on social media. What should he do?

Some financial institutions are now training their employees for signs of exploitation, keeping an eye out for things that appear out of the ordinary. Examples are a customer at a branch accompanied by someone who isn’t known to the bank, who does all the talking or withdraws large sums of money from a senior’s account.

If a client is in their eighties and the bank account suddenly shows a lot of nightlife spending, it’s a sign that something’s wrong.

One bank has an internal hotline that employees can call. The bank then turns over the report to authorities. There are also government agencies that protect seniors from financial abuse. Alabama’s Department of Human Resources has an Adult Protective Services Division, where one employee says about half of the cases are straightforward and the other half are challenging.

One woman was sending money overseas, thinking she was in a relationship that would end in marriage. She had all her faculties and that’s the key. Since she understood what she was doing, even if she was making poor decisions, there wasn’t much the department could do.

Just because the Department of Human Resources can’t help, that does not mean a crime had not been committed.

The law also protects financial professionals from liability, if they make a good faith report of possible abuse.

What about the man who was asked to make a loan with the grandfather as co-signer? He was denied the loan for other reasons. 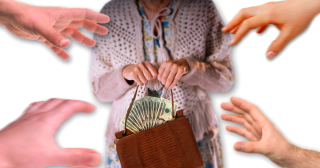