How Technology Could Support Aging in Place 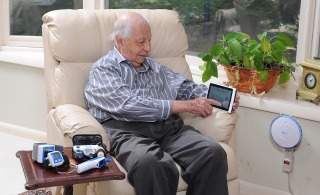 “The goal: to see if researchers can monitor and detect health changes in older adults and enable them to live longer in their own homes. For example, early signs of cognitive decline may be detected through changes in computer use or driving.”

A research assistant tested and placed sensors in the studio apartment of a 75-year-old Portland, OR resident one June morning. The man was basically allowing his house to be reconfigured, reported The Wall Street Journal in the article “A Tech Test to Keep Seniors in Their Homes Longer.”  The man was taking part in a large national study called CART–Collaborative Aging (In Place) Research Using Technology Initiative.

The study will allow researchers to monitor his daily activities by using sensors and other technology placed throughout his home.

The goal is simple: to learn whether health changes in older adults can be monitored via technology to help seniors age in place. For instance, by monitoring computer use, driving or changes in gait and movement, the researchers will be able to detect changes or fragility issues.

This is a four-year study funded by the National Institute of Health and the Department of Veterans Affairs. The technology has already been installed in approximately 50 homes. However, the plan is to set it up in 250 homes. The seniors have agreed to allow these systems to be in place, until at least 2020.

While there are sensor-based monitors used by the elderly at home, no company has had any success with this complex a system. The logistics have been too daunting.

A CART system is seen as a potentially major change in how patients who are sent home from the hospital, for instance, or who complete their rehab, can be monitored.

At the recent installation, barely noticeable sensors were placed on the walls of the bathroom, kitchen and living space and four were installed on the ceiling. There’s no camera or video, just gathering real-time data, as the resident goes about his day in his apartment.

A slowed gait might indicate different health problems. Leaving the home less often, might signal depression. The hope is to find digital biomarkers of problems earlier than if the patient were seen in a clinic.

The system includes a pillbox with sensors to track medication use. A special scale is used to measure body composition, weight, heart rate and arterial stiffness, an important measure of cardiovascular health.

Resource: The Wall Street Journal (July 25, 2018) “A Tech Test to Keep Seniors in Their Homes Longer”