Hardest Time of Aging? Between Competence and Incompetence 年老的艱難時期？在有能力與無能之間 (中英對照) 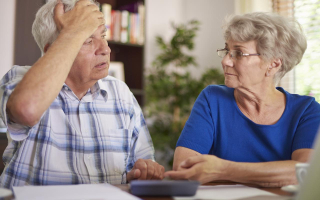 “An example would be a patriarch who is used to being in charge. He's stubborn. He never wants help with anything. However, you notice that he is making some risky choices with money that just don't make sense to you.”

This is one of the toughest parts of watching parents age: as they move, slowly but steadily, from being the reliable, responsible, and wise people you always knew, to becoming less mentally capable. It’s a slow process. Every time you think they have gone beyond the point of being able to take care of themselves, they prove you wrong.

Are they incompetent, from a legal standpoint? No, not yet. However, their decisions, especially those regarding money or who they chose as new friends, are starting to worry you. That’s the issue addressed in “Aging Parents at The In-Between Stage: Partially Competent and Partially Not” from Forbes.

In this example, the aging parent presents well to the outside world, socializes well and seems to have all his faculties. The problem is, the children who know him see changes and worry for what might happen in the near future. Their father had always handled his own finances, and now he’s giving money away to anyone who asks for it. He is going through his accounts at a surprising rate, unlike his lifetime behavior of being an extremely careful money manager.

The first step for this family: a meeting with all the adult children and the estate attorney. They start with a review of the legal documents that had been prepared previously by the attorney. A Durable Power of Attorney had been put in place, when the oldest child had been appointed as his agent, with unrestricted powers. She had the legal authority to take over the management of her father’s accounts.

By using the Durable Power of Attorney, she was able to gain online access to all her father’s accounts to see what was actually going on. It was worse than the family expected. He had given money away to charities and to strangers. Armed with this information, she had to speak with her father. He bristled, but she persisted, knowing that she had the legal right to do this and the support of her siblings.

She suggested that she visit him to help out. It took several weeks of suggesting it, but at last he relented. On his desk, she found collection notices and a cancellation notice from his car insurance company for failure to make payments. By presenting the prospect of not being able to drive because of a lack of insurance, she got his attention to the seriousness of the matter.

Next, his assets were moved out of accounts where he had access. He continued to give away his money, but she controlled how much damage he could do.

This family was able to protect their father from a free-fall into poverty and dependency, because proper estate planning had been done well in advance. They worked together to address the problem and had the help and advice of an estate planning attorney. This is what good estate planning looks like.