« He Retires but It Doesn’t Mean You Should | Main | Getting Married Again? Protect Your Spouse and Your Children 再婚？保護您的配偶和您的子女 (中英對照) »

Widows Be Wise About Social Security 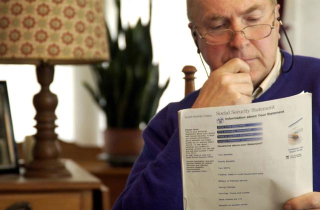 “Losing one's spouse is one of life's most difficult and overwhelming experiences. Claiming Social Security survivor benefits apparently ranks as a close second, based on a frantic phone call I received from a close friend this week.”

A friend who was unexpectedly widowed, when her husband died at age 44 of a massive heart attack, was left with a toddler, a teenager, too little life insurance and household income that had been cut in half. She managed, as reported in Investment News’ article “Inaccurate info from Social Security Administration a challenge for widows,” in part thanks to Social Security.

Now that she is planning her retirement, she’s struggling to get to the heart of her benefits as a surviving spouse. She’s not the only one facing this issue.

Her financial advisor recommended that she claim her survivor Social Security benefits when she retires next January and then switch to her own benefits at age 70, when the amount has maxed out.

Three separate calls to Social Security Administration representatives resulted in three incorrect answers. They told her that she was not entitled to survivor benefits, because her own retirement benefits were larger. Each reported that there were new “deemed filing” rules that require anyone born after Jan. 1, 1954, to file for all available benefits at the time of the claim. They also said that people who are born after that date are no longer allowed to claim one type of benefit first and then switch to another.

This misconception was based on an old file and switch method that was changed and is no longer available. However, the change does not apply to survivor benefits. The agents did not know the difference.

Earlier this year, an internal Social Security Administration report found that agents and representatives gave widows and widowers incorrect advice 85% of the time, based on random samples of claims by surviving spouses, who were also entitled to claim their own retirement benefits.

Social Security had been a blessing for the widow, as she received dependent benefits for two children as she struggled as a single parent. When the kinks were worked out, she was pleasantly surprised to learn that her survivor benefit was much larger than anticipated, given the short span of her late husband’s working years.

However, this incident and the statistics from the study should serve as a warning to those about to navigate their own journey for Social Security survivor benefits. Don’t be afraid to ask questions, call more than one time and visit the Social Security website to get information on your benefits.

Your elder law planning attorney will also be able to help, since he keeps tabs on changes in the law and various government institutions that impact seniors.