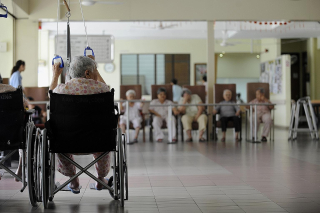 If the Louisiana legislature cannot fix a budget shortfall soon, 30,000 nursing home residents in the state will be evicted on July 1st.

It would probably come as a shock for most nursing home residents, if they were suddenly sent an eviction notice. It would be even more shocking, if the residents were all on Medicaid and the government was paying for their care.

That is about to happen to some 30,000 nursing home residents in Louisiana, who are on Medicaid.

The state faces a revenue shortage and the Louisiana House's budget cuts include Medicaid funding. That would mean that the state Medicaid program will no longer be able to pay for nursing home care, as of July 1.

The notices are being sent out by law as the USA Today reports in "More than 30,000 nursing home eviction notices to be sent in Louisiana Thursday."

There is still time for the state to fix this problem. However, there appears to be an impasse between the governor and the legislature over funding. Something similar could also eventually happen in other states.

As the population of the U.S. gets older, Medicaid expenses are growing for both the states and the federal government. Many states are looking for ways to change their programs to save money and the Trump administration has given them greater flexibility to do.

It is not certain how far the administration will allow states to go. For example, Kansas was recently denied its request to limit the number of years a person could be on its program. However, the administration has been more amenable to imposing work requirements on recipients who are not disabled.